The week in and around Puerto de la Cruz, Tenerife, showed how many different riding options there are on the Northern Tenerife. First some general remarks, and then some information on the routes ridden.

Traffic and roads are mostly very suitable for cycling. Drivers are polite, and usually they wait patiently to have good visibility and spacious part of the road before overtaking you. Of course you still have to be cautious of approaching traffic in tight and narrow turns. Get yourself also a rear light for dark tunnels and for riding in the mist of the clouds.

Road conditions are good if you stay on two-numbered roads (eg. TF-21), and decent on three-numbered roads. Smaller roads may have holes and they may be extremely steep.

On my first ride I cycled West from PuertoCruz along TF-5. That part up to El Tanque (particularly the new West end of the road) is meant for heavy traffic, so the road stays below 8% and shoulders are wide. It won't be much steeper to Santiago del Teide, albeit the road is narrower and more interesting to ride.

The climb to Masca is a steep one: 10-16%. My gear ratio wasn't short enough and I really struggled to make it. Even so, I think it's easier from Santiago del Teide than the other way round. Luckily it was less than two kilometres uphill, and another very similar stint after Masca towards Buenavista.

Climbing up from Masca with too long gears and too much weight was a challenge itself. When I was nearing the top of the ridge, the headwind forced me almost to a standstill. I felt proud (and relieved) not giving up. After all that effort, it was such a joy to have a downhill all the way to Buenavista.

From Buenavista to PuertoCruz the TF-5 is an obvious and easy route.

The Masca part had it's effect on the suffer factor, making this ride my hardest on Tenerife according to Strava.

I was staying in a hotel near Playa Martiánez. From this side of the town, take TF-31 to the highway crossing, and ride 2-3 kilometres towards Cuesta de la Villa. Make then a tight turn back to La Orotava. It makes some extra mileage, but saves you from excessively steep part in the beginning.

I did this climb in the noon of a workday. It meant that the tourist buses had already went up, and overall traffic was low.


There were a lot of riders along the coastal North-East road from PuertoCruz to Tejina. No wonder, as the villages are pictoresque, and the terrain merciful, max 500 metres altitude.

From Tejina to Tacoronte it's an 8 km uphill. Very good training wise: it's only 2-6%, so one can take it easy or as a series of power intervals.

For this route 34-28 is more than sufficient.

If the dark clouds and raising wind hadn't scared me back, I would've gone a bit further, TF-13 towards Bajamar and Punta del Hidalgo.

Once again, it's good to start via Cuesta de la Villa. Then, TF-320 takes you near to Los Realejos. All's nice and easy up to crossing TF-5.

I had scouted the route from the map but missed to check the parts inside towns and villages. So, it was quite a surprise to have such a steep mile-long section of 9-16% on the main road. Here you'd have use to something lighter than 34-28.

After Realejo Alto, take the scenic TF-342 westwards. My initial plan was to continue from Santa Barbara to El Tanque and then back on TF-5. But as started to feel my legs getting empty and as something got loose in my bike frame, I lost the appetite, and changed into light cruising mode.

From La Mancha I turned East to Buen Paso, and after that TF-5 led me back to PuertoCruz. 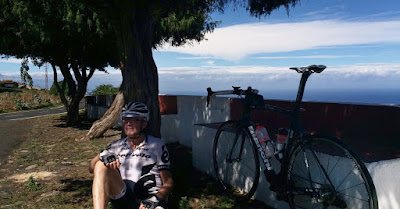 About 320 km and 7,200 vertical metres in a week. It was very much what my legs were ready for, and it also meant that I could spend time with my dearest and with my friends in other, more social activities.

Very likely an island I'll revisit next year. Not only these, but for example the Anaga peninsula would be worth riding, too.
Lähettänyt Esko Lius klo 15.29