In a quest of a bicycle 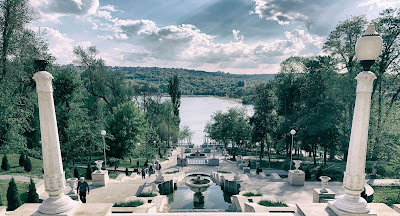 I'm reaching Shangri-La, the earthly paradise, and about to meet El Dorado, the Golden Chief there.

I've been walking quite a bit on the difficult pockmarked pavements of Chișinău, the capital of Moldova. Afternoon rush hour when old cars exhaust their smell in queues and push the pedal whenever there is an open lane. I'm checking the direction every here and there, and finally see the lake.

By the lake is Velove, a bike rental. I started to scout for a bicycle already back at home in Finland. I will be working here rather often and don't want to go insane.

I was expecting a bike shop but find a container renting cheap velos for people to ride around the lake path.

I've received pictures and a bid of 130 euro. Unfortunately they have only mountain bikes to sell but roads are bad here, so a road bike may not be as good choice as I dreamed. 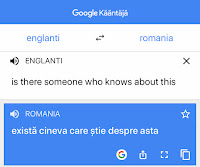 The Chief is not there but another guy. We haven't got a common language except Google Translator. With its help we communicate a bit, wait for the Chief who never arrives, and finally I get a bike for a test ride.

BTwin Rockrider is an entry level MTB. I had gotten the impression when messaging with the Chief that they are serviced and in a good condition. He may be the Golden Chief but his way to get the Gold mean raw business. The drive train is in poor condition and tyres bald. No way I could expect this bike to take the miles of a day's ride. Don't want to stop because of a mechanical in the middle of nowhere. 130 de euro pentru asta este prea mult. 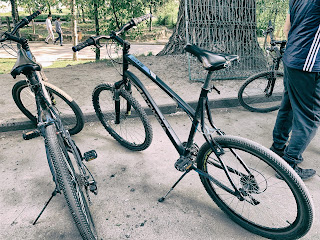 I get the Chief on the phone and he says that I may find what I'm looking for at Velopoint. I open the map app and it shows that the shop is nearby, only 2 km to walk. There, then.

I was about to miss Velopoint when walking by it the first time. Luckily my conciousness registered those several bikes on the pavement and I started to look around. That garage door opening was actually the boutique I came for!

The mechanic there was quick to get his own phone and reply on his Google translator. First he was like they only rent but then he realized a business opportunity and started to go through his selection. 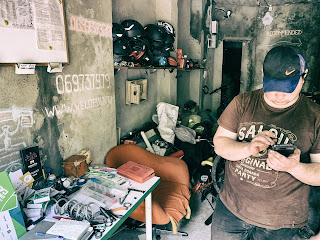 He found an urban unisex bike that looked big enough for my long legs. It turned out to have too short seat post in order to get the saddle high enough. I felt lucky as otherwise I would have considered this not-so-suitable vehicle.

I had searched 999.md – a local graigslist – already before leaving home and found an old Bianchi road bike for sale. I hadn't heard anything from the seller during my first day in Moldova but now, sitting on a street bar terrace opposite to Velopoint, sipping a beer, I got a message from him. 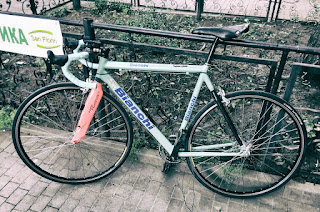 He was ready to sell and at home. Welcome! Ok, I will walk there, albeit it's on the other side of the city.

Without my jacket, the heavy camera bag with my laptop and all it'd been easier but finally I reached the address which seemed to be at Spitalul Clinic al Ministerului Sănătăţii. Quite odd to like at a hospital address. I waited there for a moment, texting him that I've arrived. Phone battery running out.

I needed my phone also to find my way back to the hotel, so after five minutes I left. Almost at the hotel door I got a message from him. I suggested him to take a short ride to my hotel but he said it's not possible to ride that bike.

Very well. How on earth did you think I could ride it, then? No deal. 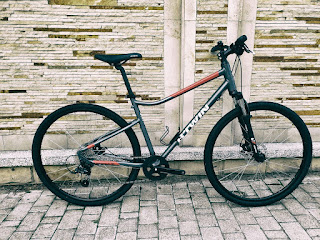 Candidate #4 was a BTwin Riverside 500 bike in good condition. A knowledgeable guy with whom I messaged quite a lot and arranged a meeting for next evening. He'd come to the hotel.

Looking strong now! Next afternoon it started to rain. In the evening he texted that he was downtown taking shelter from rain for a moment. We decided he'll come when/if rain stops. And indeed it did stop quite soon.

I felt like the medieval Templars or their German counterpart Parsifal in their search for the Holy grail.

Back to 999.md which felt now even more familiar than my favourite tv show.

I found a cyclocross bike for sale. That's actually a great combination of an endurance road bike and of MTB resistance to punctures. An entry level one, Boardman CX Comp, and a bit on the more expensive side. Anyways the best combination so far.

In the middle of the night we chatted quite a while with the seller and he was ok to come downtown to the Triuph Arch next day at noon.

He did come and he did deliver.

It's got only Shimano Sora group set and tank-heavy wheels but the seller had taken good care of the bike. Brakes were non-existent but maybe it was due to entry-level disc brakes and rainy weather.

It's a deal! Indiana Jones found the lost Ark! I found the bike, and I'm able to ride from now on every time I visit Moldova in this project which will take place rather often. With some brake adjustment it's now ready for my whole-Saturday ride to the countryside and some neighbouring city. 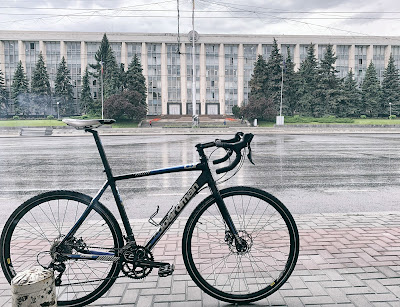