Snapping a belt and losing a chance to ride in Colombia: indoor cycling woes

I had followed the smart indoor cycling fad for some time before buying my first turbo trainer.

I decided to get on the bandwagon as soon as the standards (like ANT+ FE-C) and the products (trainers, virtual training software) had matured enough to focus on riding, not on data engineering.

I've had two rather stress-free years until now.

After the crash (outdoors! see Aftermath of a crash) I noticed that my Favero Assioma Duo pedals didn't align with the Elite Direto trainer power meter readings.

Their power readings used to be almost identical:

Now it had generated a difference:

Which was correct? I was quite sure my fitness level was up to Direto numbers and Assioma Duo pedals were incorrect - particularly as they took a hit in the crash.

So, I calibrated the pedals. Still same difference between power readings. Next, I did Static Weight Test for the pedals. Still the same. (Albeit it corrected the measured imbalance of my left/right feet and shows now that I pedal 50/50 ±1%) 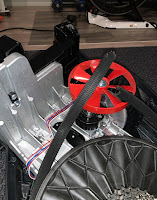 Something does not compute when every test show correct readings and yet the curves have drifted apart.

I heard that Elite could take a Teamviewer session and change some settings in order to sort this kind of an issue. That would be the thing to do next week!

Unfortunately the belt of Direto snapped during El Giro de Rigo on Sunday. Bloody hell! DNF means I did not complete the entire event and thus lost my chance to win the Grand Prize, a once-in-a-lifetime trip to Colombia to ride in the 2020 El Giro de Rigo alongside Rigoberto Uran.

Currently I ride with my old wheel-on Elite Qubo Digital B+ (terrain interaction with Zwift) and Assioma Duo pedals (power & cadence). Two service-part belts are already on their way, one from the local vendor and one from the manufacturer. At least I'll have a spare part.
Lähettänyt Esko Lius klo 22.17